The 2019 April Fools Tournament at BHi London is in the books, and despite some cooler weather, the action on the floor was hot!

After the opening round robin games, the standings heading into the playoff rounds looked like this.

Semi-Final 1: The Flamingos vs. The Big Sticks

The Flamingos scored a convincing 7-1 victory over the Big Sticks.  A strong performance by Jordan Daer (3G 1A) allowed The Flamingos to come out on top of this match up and punch their ticket to the final.

This was easily one of the best games of the tournament, which saw the Busch Possums come out on top with a 4-3 win.  The Busch Possums were led by a strong performance from Chad Garner (2G) and would move on to face The Flamingos in the final.

Final: The Flamingos vs. Busch Possums

This was a very competitive final game that saw The Flamingos on the board first in the closing minute of the first period to take a 1-0 lead into the second.

In the second, The Flamingos would build on their lead, going up 2-0 on a goal from Jordan Daer.  However, Iain Popp would get the Busch Possums on the board and pull them within striking distance.  In the final seconds of the second period, Travis Duncan would notch another goal for the Flamingos and they would head into the final period up 3-1.

In the third, it appeared that The Flamingos would take control going up 4-1 on Travis Duncan’s second of the game however, Jon Garrett would reply less than thirty seconds later to pull the Busch Possums back within 2 goals.  This momentum was short lived however, as Collin Capstick would put the game out of reach and The Flamingos would move on to a 6-3 victory.

Congratulations to The Flamingos – the 2019 April Fools Tournament Champs 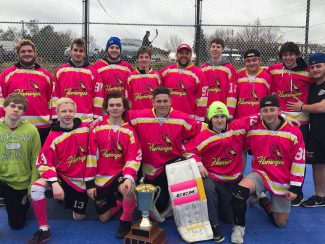 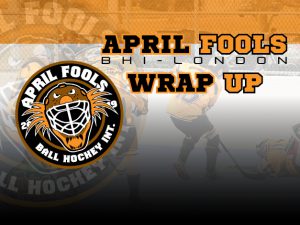