The Barn Division featured six teams including the perennial favourites, BDB, Vikings, and Flamingos.  The standings after the preliminary rounds.

BDB would carry their momentum right into the finals opening the scoring in the first with two unanswered goals from Brandon Cain and Justen Pettipas.  The Vikings would finally find the scoresheet in the second period on an unassisted goal by Matt Stairs.  However, that is as close as the Vikings would get as BDB pulled away in the third with two more goals, enroute to a 4-1 victory, earning them the Barn Division Championship.

The Rec Division was a very competitive division, featuring a handful of strong teams including the Hamilton Outlaws, Hamilton Haze, and the Turtles.  Standings after the preliminary round.

This game featured a standout performance by Knights’ netminder Steven Araujo, who stopped 30 shots for the shutout, and earned the Hamilton Knights the Rec Division championship.  Kyle Robertson’s overtime goal was the difference maker, leading the Knights over the Haze in thrilling fashion. 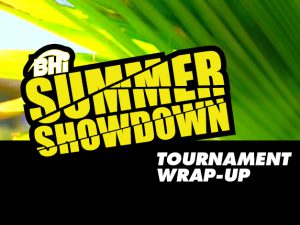