The Spring Teaser kicked off the 2019 tournament season at BHi Brantford, running from March 15-17.  Fourteen teams descended on Brantford to compete for the championship in the Rec and Barn Divisions.

After the round robin, the Hamilton Haze and Turtles both sat with 4 points and had a record of 1-0-2 while the Ducks held on to third with a 1-1-1 record followed by The Ringers at 0-2-1.  Heading into the playoff round, the Haze would take the number 1 seed based on goal differential.

In the semi-final the Haze would earn a hard fought 2-1 victory over the Ringers.  Mike Arsenault would score with 5 seconds remaining in the 2nd period and that would prove to be the game winner.  The Haze would move on to the final to take on the winner of the Turtles versus Ducks.

The second semi-final wouldn’t be as close as The Turtles would build a commanding 4-0 lead on the Ducks after two frames, and would ride that differential to victory with Jordan Kats picking up the shut out.

The Turtles and a red-hot Jordan Kats would carry their momentum into the final earning a 2-0 victory over the Hamilton Haze.  Mike Rea would score the eventual game winner and Kats would stop all 21 shots he faced to earn the win and 1st star.

The Barn Division featured 10 teams with only the top 6 advancing to the playoff rounds.  After the round robin, the standings looked like this:

In the first quarter final, the Niagara Coyotes would hold off a late push from Game 2 Buck to take a 4-2 victory.  James Chicoski would score the winner for the Coyotes in the closing seconds of the second period.

In the other quarter-final, the Eclipse and Flamigos would go to the distance with Rob Smith eventually securing the 3-2 win for the Eclipse.

In the semis, BDB would continue their dominance, taking advantage of Eclipse penalty trouble to easily dispatch them 5-1.

In the other semi, the Hamilton Knights would get a goal from Mike Papetti in the second, and hold on for a 1-0 win to advance to the final.

A low scoring and competitive final game saw BDB take a 1-0 lead with 2:45 remaining in the third and hang on for a 1-0 victory.  BDB netminder, Jonah Evans was solid stopping all 23 shots faced to secure the win and a perfect weekend for BDB. 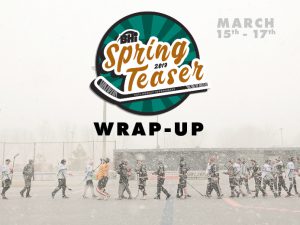 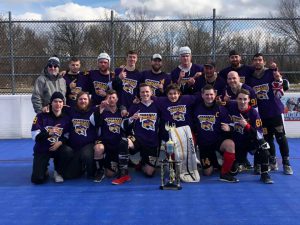 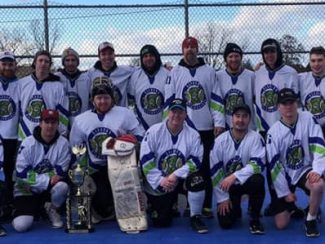