The BHi April Fools ball hockey tournament kicks off this weekend at BHi London. This year’s tournament will feature some powerhouse teams, who will be looking to build on their early seasons success.

The two teams making the most noise coming into the April Fools tournament are The Flamingos and the Busch Possums.

The Flamingos put forth a solid effort at last month’s Spring Teaser. They finished in the middle of the pack however, every game they played was close.

The Busch Possums have been together for a couple seasons now and recently brought home the 2019 Winter Season championship at BHi London.

The Big Sticks are fairly new on the scene but they are turning some heads. Expect them to make a game out of every match up; no one should expect to walk through this team.

We are always leery of a team we don’t know anything about. In this tournament, it’s Uchiha. Could they be the team to take everyone by surprise this weekend? 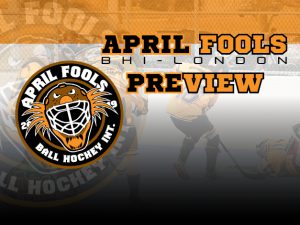